In Thirteen Mediations on the Untranslatable, seriality offers a method to contemplate the temporal. Printmaking as a medium always contains the possibility of the multiple, and the slight variations in the thirteen etchings are intended for close viewing. The multi-plate bleed etchings are intended to be uncontained and therefore contemplative and enigmatic, deliberately at a scale to draw the viewer in to personal encounter. The etchings are accompanied by a thirteen-stanza poem of the same name. The images and text are intended to provide complementary entry points into the meditation: each etching with its own stanza displayed below or beside it. The etchings employ the same two spit-bitten plates that form a base layer that is then overprinted with different, abstract line etchings, that resemble the mode but not the meaning of words and so are not prescriptive of interpretation. This work was shown in 2017 at a group exhibition Connect-ed by the NightLadder Collective at the Brisbane Institute of Art. 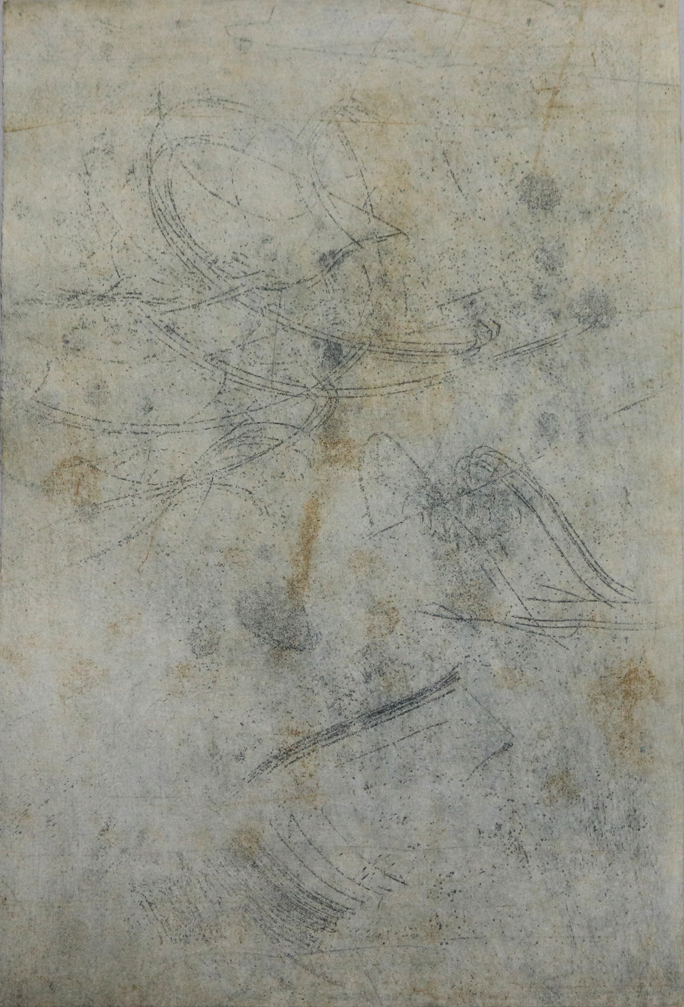 Open the manuscript to a parable
of mustard seed or stars in a peacock’s tail.
Beauty, that is symmetry, how delicate a lyre.
The peacock slowly shakes himself out
in an act that could be mistaken as effortless
were it not for the thought of his withholding
:a quivering. Desire’s mirror in ourselves. 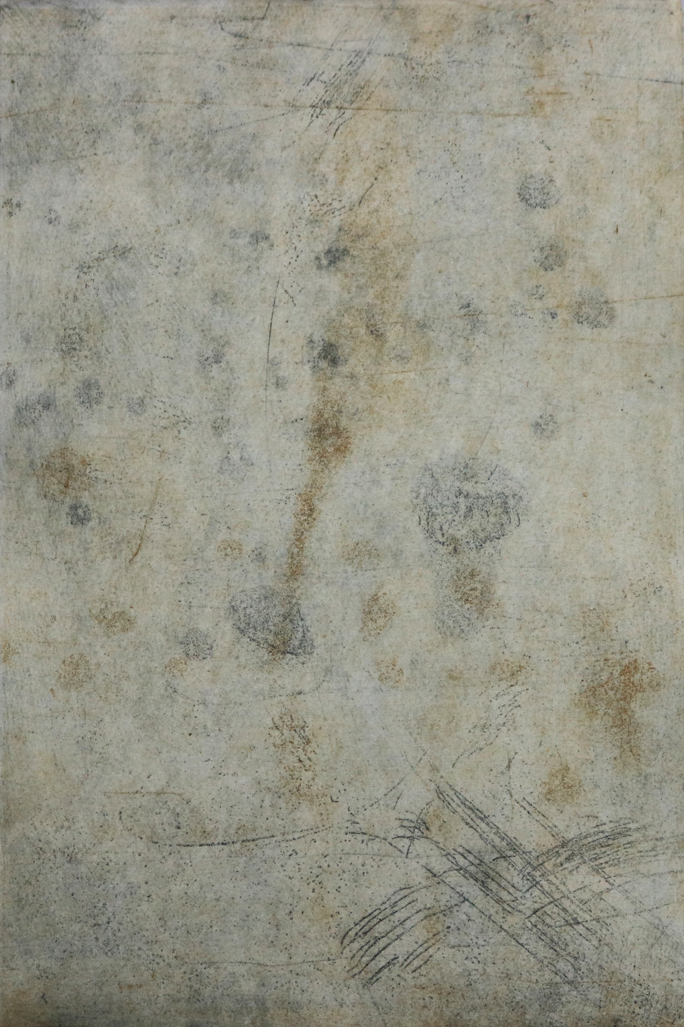 Above us, held back invisibly
the moon commands her four rivers,
her citadels and fortifications, Alexandria’s
lost library of the knowledge of the world.
The sun a fiery glyph that speaks to alphabet
that is alive, consuming
:a warehouse of books already alight. 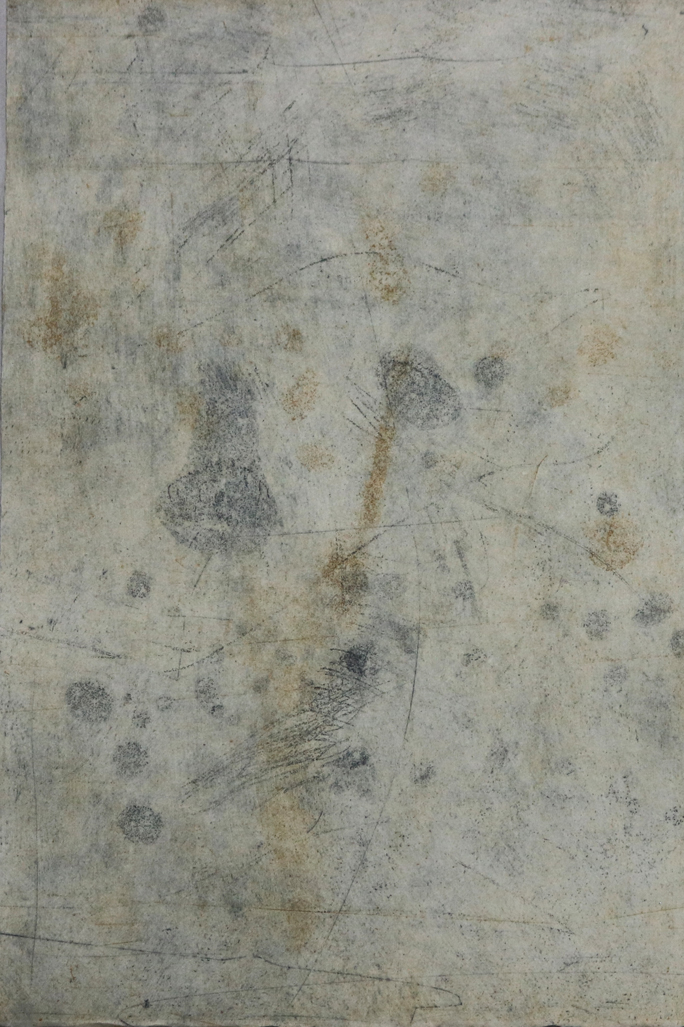 Open-crowned
seed heads held aloft. Innocence returning
to itself despite mechanism, brutal weapons
:caltrop, mace and morning star.
The oh so tender flesh.
Hand a clodded claw on the move
the human a scrawl, always indecipherable. 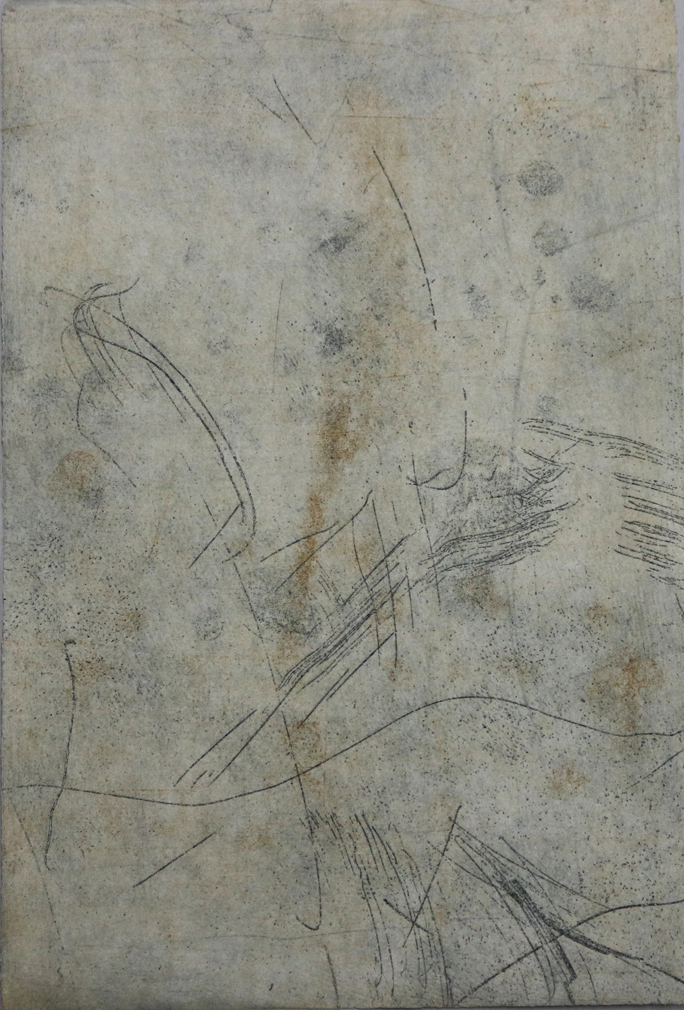 Yet flickering light moves its way forward
through the quiet of transcription.
Each sweep a candelabra, fidelity and complexity
(and in our genome mapping
how utterly incomplete it proves).
The vigilant mind, the scribe of the library
but still our fallibility. 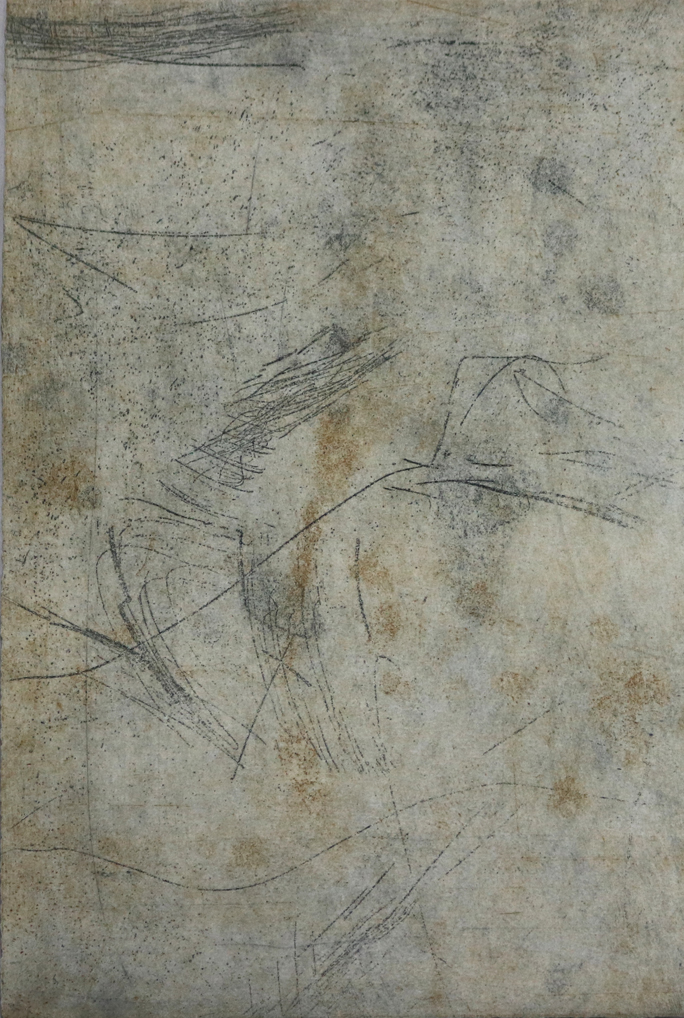 Look deeper into the pages there are faces
knowable at the extent of the hidden,
women who float dreamily over waterfalls and weirs.
In viaducts and castles, in their connected green ponds
under damsel flies and water rills
how naked and beautiful they are.
A small creature, club-tailed, rests upon a leaf. 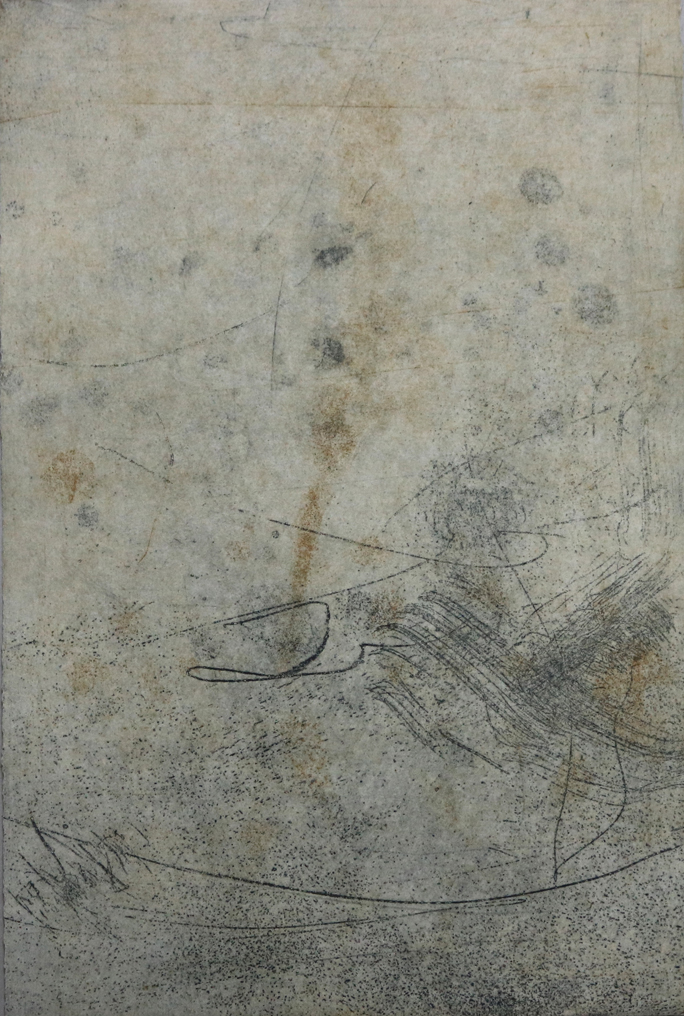 Under a painted glaze
under again the drawn line: the blue water.
In rain, cistern, fountain, basin,
in treacherous whirlpool.
Stars over ploughed land
in chalky time-lapse gestures against the body
each lifts her flower into the sky. 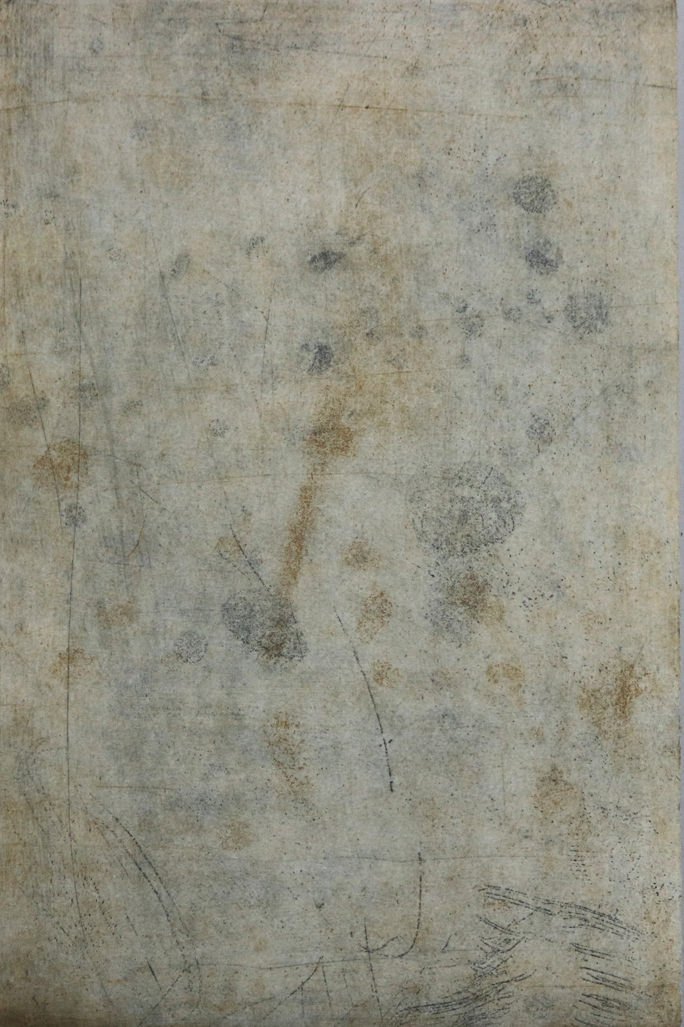 And will I in the looped stems of lettering
droop, syllabary at an uneasy boundary?
Turban, tendril, above alternating cup.
Words between the images rise so hopefully
above architecture
in minarets and pauses. 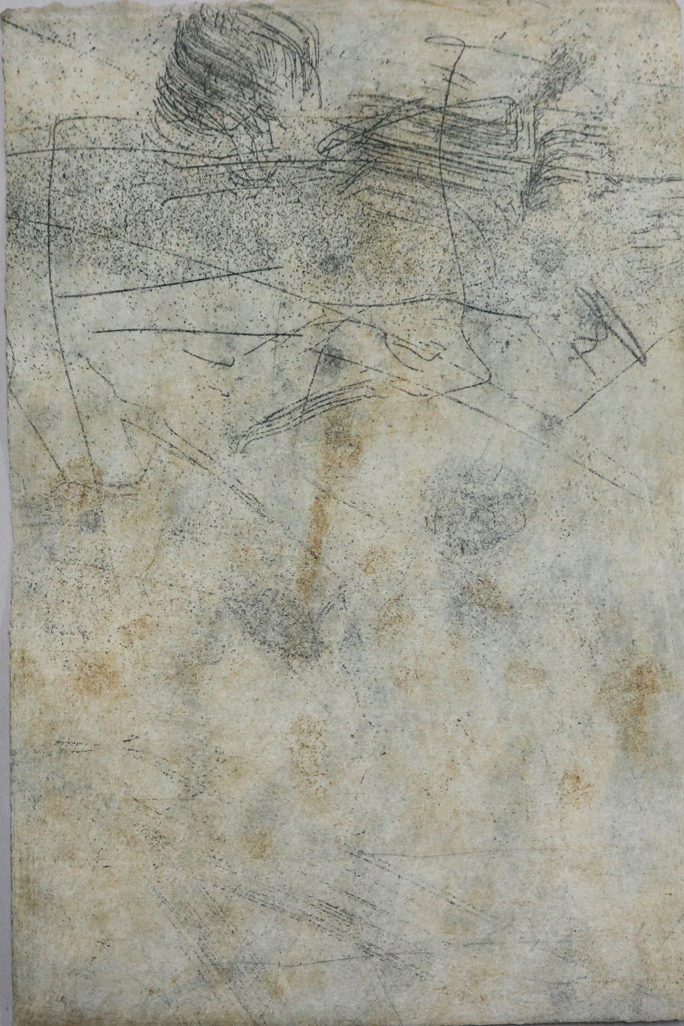 Clouds full as seedpods, strange as cobbles.
Being other, being together
they hold hands, swim the now green water.
Their curtained gaze upon each other
over us a chalice, a font, a mystery. 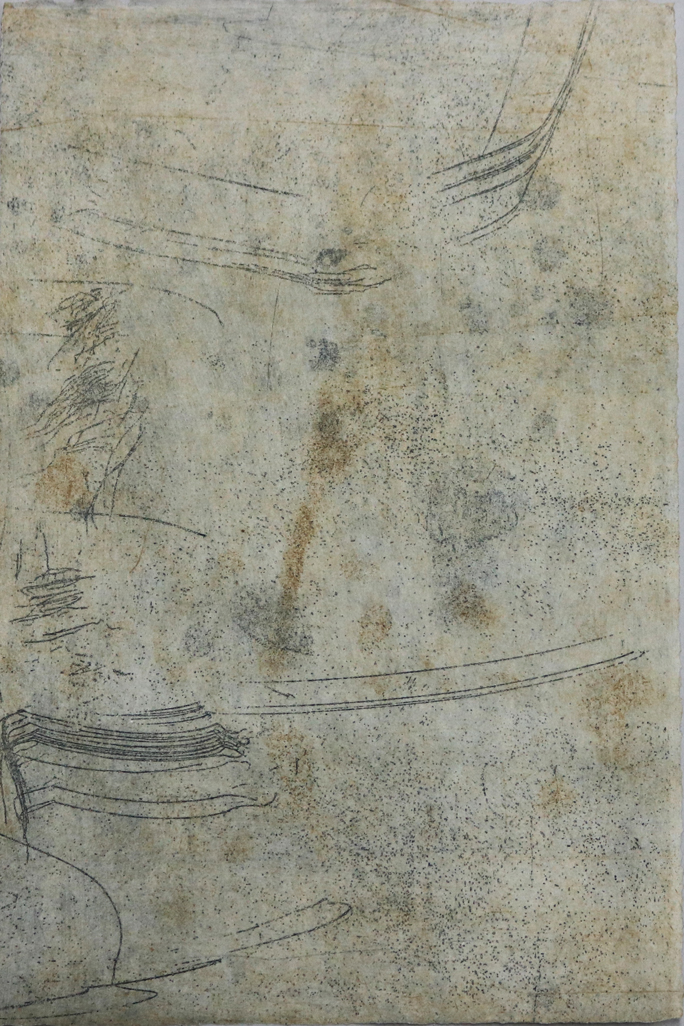 A towering, reaches upward,
hint of thorns (reversed the image bleeds).
Language of cipher random or natural,
meaningless or meaningful. These unknowns
speak in tongues to the plainsong of existence
they rise above the waters. 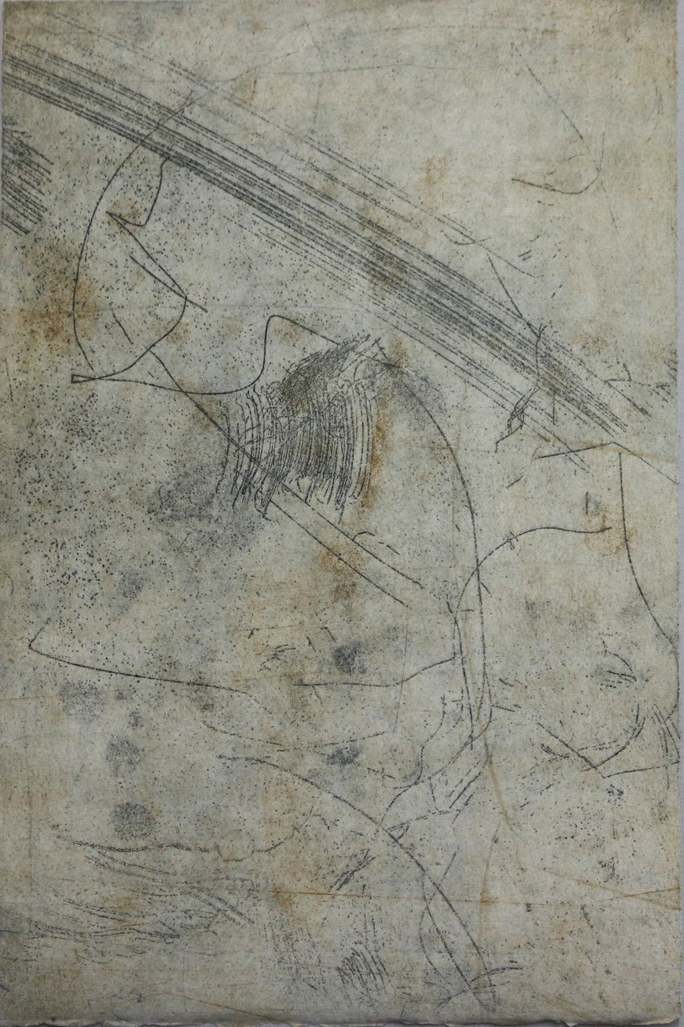 A green moon recto
becomes a water-lily verso, each reflected
in a pool. Waters swelling in the sky.
A voice in the night
when stars are arranged in the heavens
as pale white flowers. 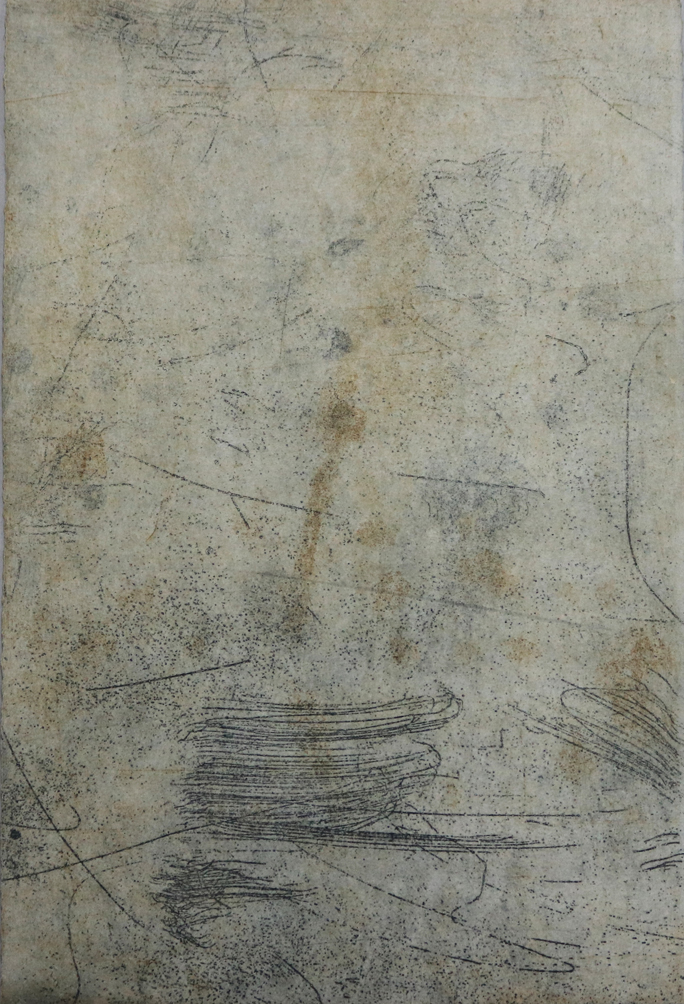 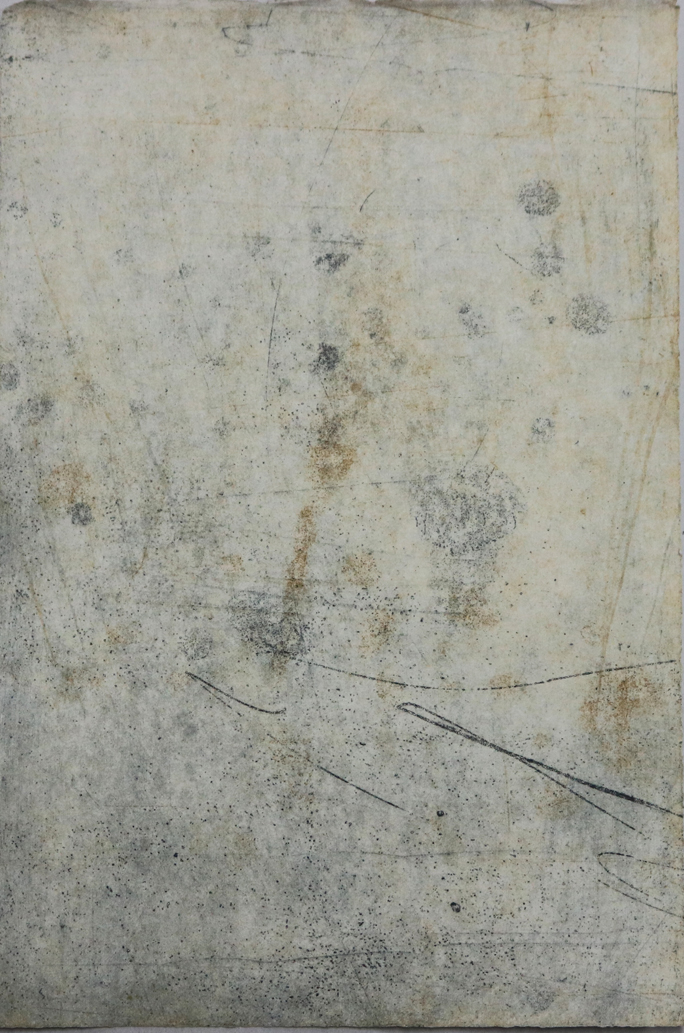 No angel, but night, its necessary destroying
and remaking. Hovering: shadow
stain. A breath withheld. Opening the spent flesh.
Oak-gall will eat all away, poisonous or useful
poisonous and useful.
Skin and its aftermath, back to the earth. 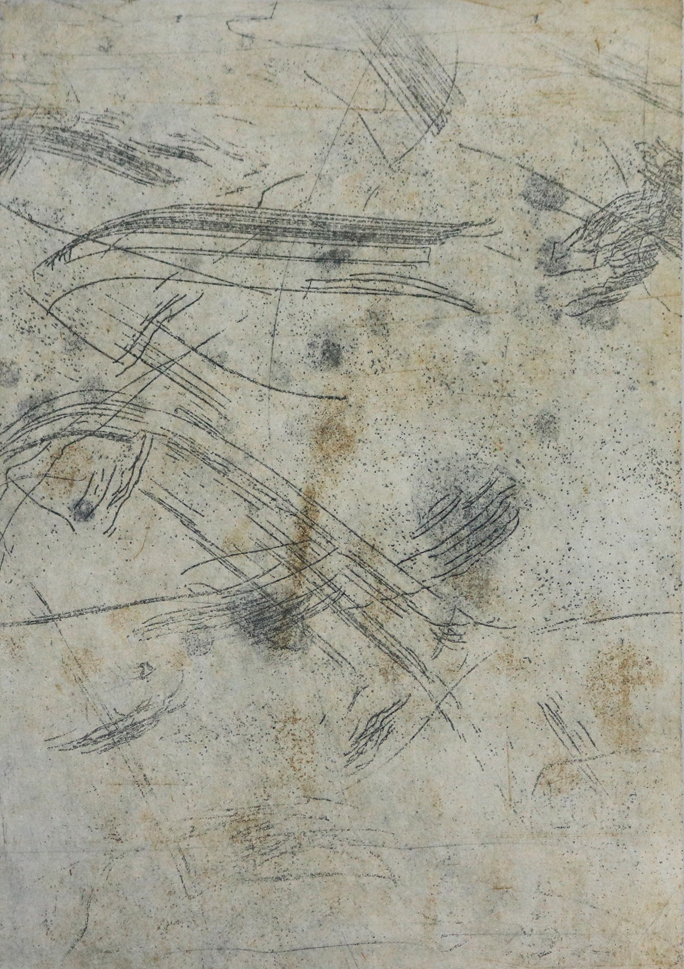 A map or clouds
or map of unreadable clouds?
Before we see it, the cut or shape
a centipede of correction broidery
:the torn reveal
a bird as it flutters at the glass.

Angela Gardner’s first poetry collection Parts of Speech (UQP, 2007) won the Thomas Shapcott Arts Queensland Poetry Prize; then followed Views of the Hudson (Shearsman Books, UK), and two fine press collaborations: twelve labours, with visual artist Gwenn Tasker, and The Night Ladder with artist Lisa Pullen, all 2009. Her poems have been anthologised multiple times in the ‘Best Australian Poetry’ series. Her most recent collections are The Told World (selected poetry) (Shearsman Books, UK) and Thing&Unthing (Vagabond Press, Sydney), both 2014, and a chapbook with artist Caren Florance, The future, unimagined (Recent Work Press & Ampersand Duck, Canberra, 2017). In 2018 she was awarded an Australia Council new work grant. A manuscript, Some Sketchy Notes on Matter, was shortlisted for the Dorothy Hewitt Award for an Unpublished Manuscript 2018. She edits at www.foame.org.