Can one blame anyone for the emergence of the COVID-19 pandemic that started in December 2019? Several accusations have been made, often following a particular political stance. While authorities in China were blamed for initial COVID-19 secrecy with good reason (Kelly 2020),  unfounded suggestions were already being made in January 2020, by the conservative US politician Tom Cotton (R), that this virus had escaped from a laboratory in Wuhan province (Stevenson 2020). Soon the Trump administration vented a similar suspicion (Mason 2020; Brewster 2020). However, scientists contradicted such accusations and pointed to evidence that COVID-19 — like other coronaviruses — had their origin in bats or other animals (Morens et al. 2020; Ciotta et al. 2020).

This author will leave it to expert scholars to address this side of the catastrophe. He has family and friends in the age group (over 65 years of age) that is vulnerable for severe morbidity or death after infection (Ciotta et al. 2019). In the Netherlands, where he lives, there is experience of a relative lockdown: early in March 2020 people were advised to stay and work at home. Essential professions (health care, police, workers in infrastructure) were excluded, but there was no formal restriction on the time or distance that one could move away from home. Despite this lack of formal constraint for most citizens, from mid-March homes for the elderly became like prisons, with seniors caught within walls, while family and friends were not allowed to visit (Government of the Netherlands 2020). For all those, and for other people considered vulnerable, there rose feelings of both fragility and restraint. Protective measures and structures were seen as feeble. The fact that despite restrictions, many homes for the elderly became hotspots of infection, with people unable to leave, fuelled feelings of unease or even despair. Conversations by email or telephone with contacts in his country and abroad (e.g. Italy, Germany, the UK, Russia, the US) strengthened the author in his perception that people in all those areas, affected by the pandemic, shared feelings of being both under threat and pushed into loneliness (see Gupta 2020).

The catastrophe that struck both nearby and distant societies stirred the author to formulate words and phrases, and select images. These included photos of the woods near his home, as well as artworks that seemed to fit the occasion. A composition appeared that translates the author’s experiences from February to August 2020, offering his own feelings and views, and those of his contacts, on the COVID-19 pandemic and its social consequences.

The uncertainty of fate, the constant yet variable presence of a death threat produced by a minuscule viral particle, and the denial due to arrogance or ignorance by so-called leaders as well as their followers (Colarossi 2020), magnify the impact of the COVID-19 pandemic for those of us who feel themselves potential targets, as well as those who think they could dodge the bullet. The weight of the pandemic as a threat to personal health, and its potential function as a transmitter of infection, are keenly felt.

The disaster came to our civilised / dwellings, lightfooted, / full of understanding, with / gold-filled teeth and great appetite.

Our people, properly educated, / were without prejudice / and laid the tables with food, / spices and drinks.

Before a shared meal / they stood in rows / for the photo ceremony.

The photo still hangs on the wall / with the only survivors / being me and Susan, / the girl adopted by the neighbours / two houses down the road. 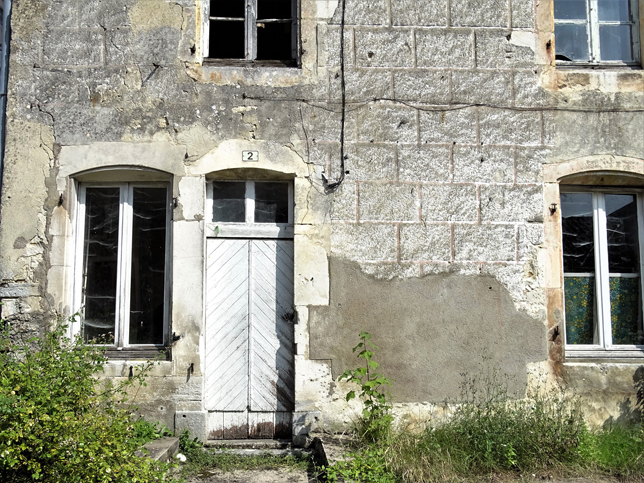 Death is a friend

Walking in the bush / abound by mosquitos and ticks / the stillness is accentuated / by the song of birds and / lack of signs of human action.

Death is a friend of / ancient forests, / just because death is silent / in passing, / and later / in waiting for our arrival. 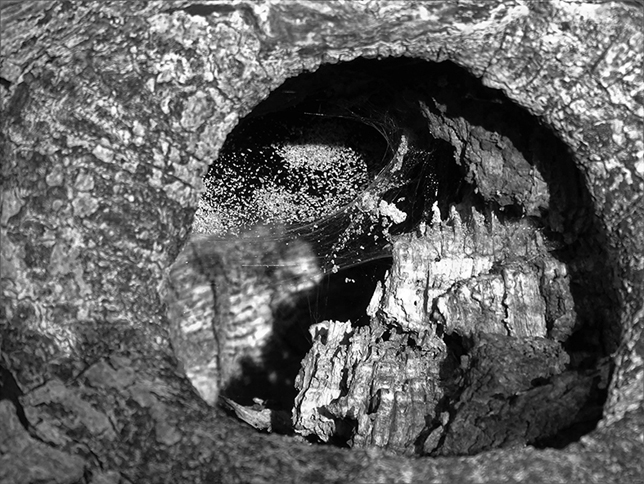 (Some prefer not to be / labelled according to sex.)

(Opinions about opinions / are most dangerous.)

See the body talk, / look at the feet, the hands, / the direction of the eyes, / and wait for a few seconds / before you get involved. 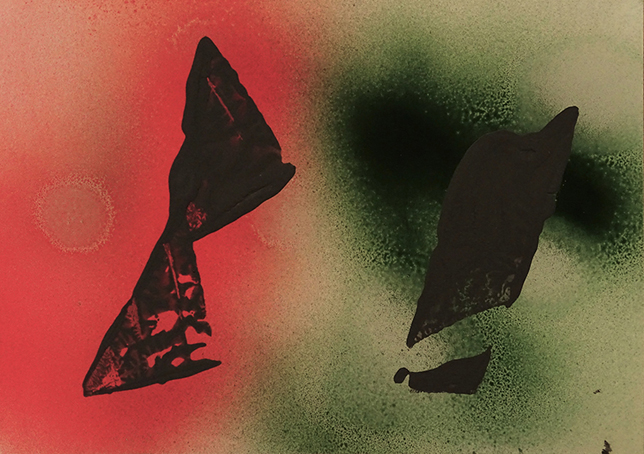 From where I stand, / for certain, not only this moon / but all other moons / are flat.

Standing on the edge and looking down,

Joy, since this whole condition / must be a joke / that everyone believes / but me, standing

on the edge, razor-sharp / cutting my toes, / trying to get a hold. 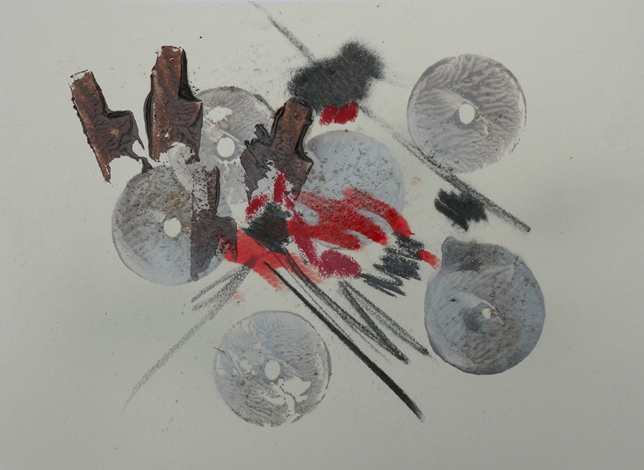 No wonder that / miracles happen / at certain times 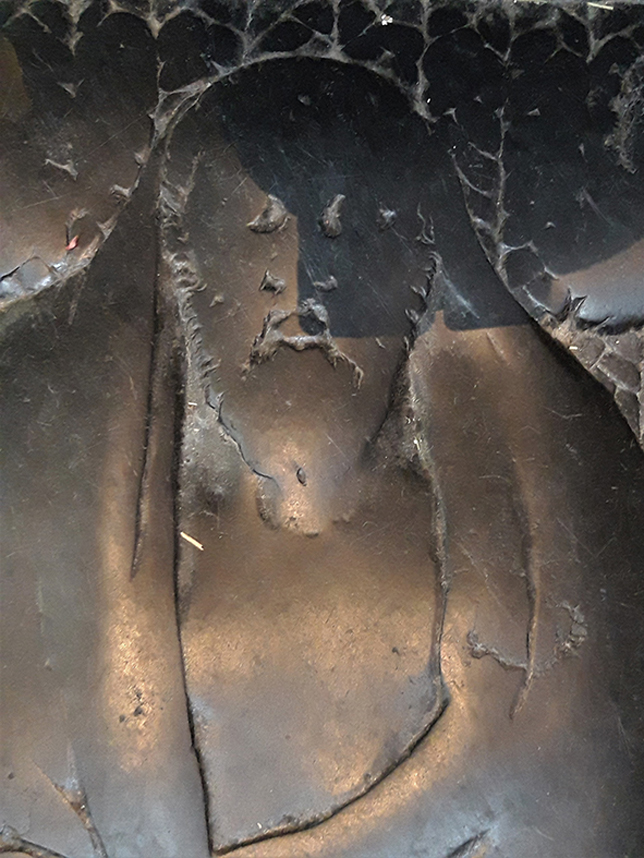 the ants swarm over a piece of bread, / their aim is clear, / existence as sole interest.

philosophy is left to those / able to shoot / the essence to peace. 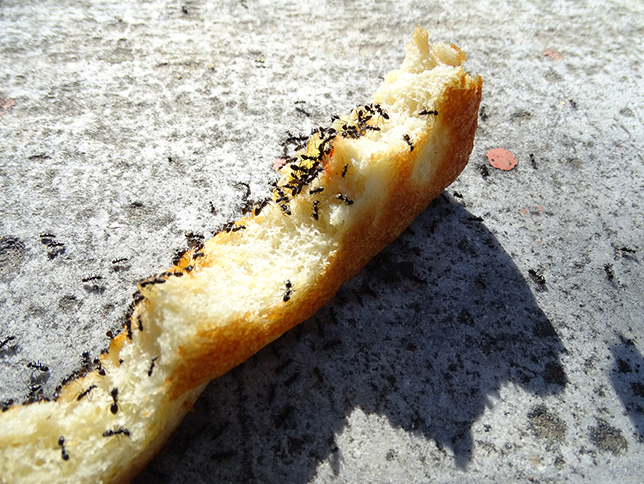 Basic terms / (explain) / the fall as junction / between earth and / above

Swift and silent / grades / of an approach / unwanted but /inevitable,

once steps were / made from / one position / to another / without thinking / ahead. 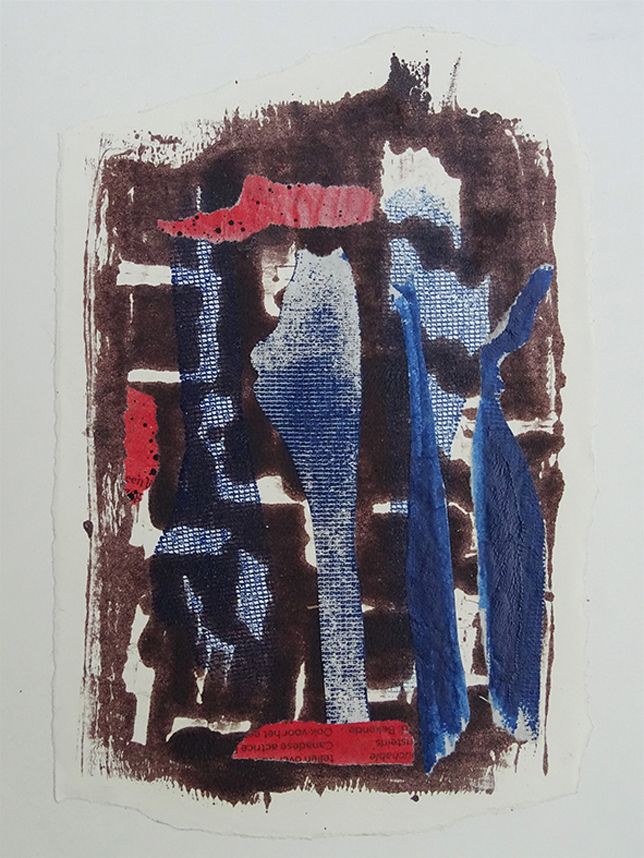 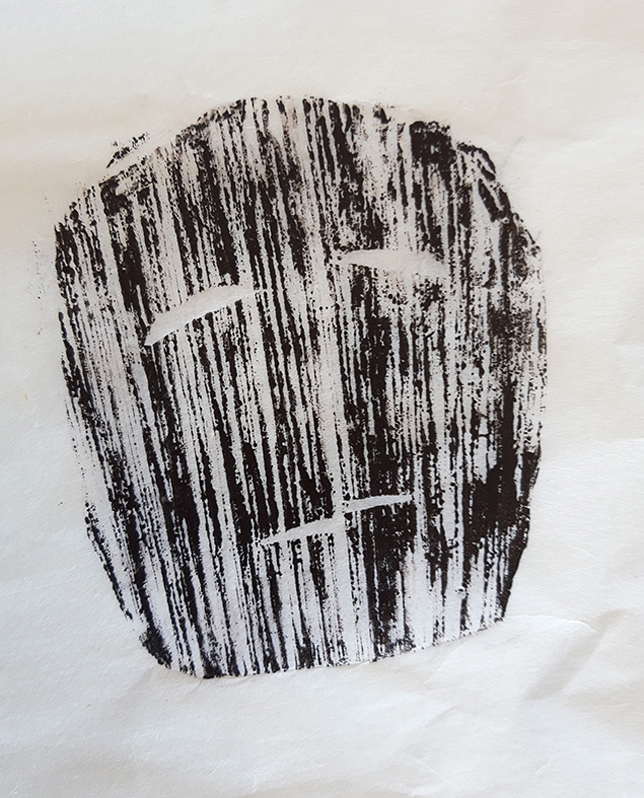 The author thanks Robert van der Kroft and Jaap Joles for valuable help with English grammar.

Text and photos/artworks by Drager Meurtant

Drager Meurtant is the artist alias of Gerard Rutteman (The Netherlands) who - after graduating as DVM and obtaining his PhD degree in veterinary sciences – has worked for 37 years in veterinary oncology as clinician and researcher. In this period he has published over 120 publications in peer-reviewed biomedical scientific journals, as well as several journalistic essays for the general public. He undertook a few exercises in the making of assemblages over these years, and seven years ago started a serious investment in time and energy in photography and in the mediums of assemblage, collage and graphics. Images of these artforms on websites are mostly accompanied by short poetic, often ironic, texts.