Skip to main content
Double dialectics in a hybrid post-memoir

This article outlines some of the challenges of writing critically, and creatively, from both inside and outside relationships, experiences, and cultures. It questions how the lived experiences of a WWII displaced person from Poland, an economic migrant from Italy, an abandoned son in the Ukrainian Soviet Socialist Republic, and a peacetime second-generation immigrant in England can be represented through double dialectics to provide ‘nuances that mediate between relativism and objectivism to offer creative avenues of thought [not only for] contemporary ethical and epistemological problems’ (Moscovici 2002), but also for writing a creative post-memoir that operates beyond empiricism. 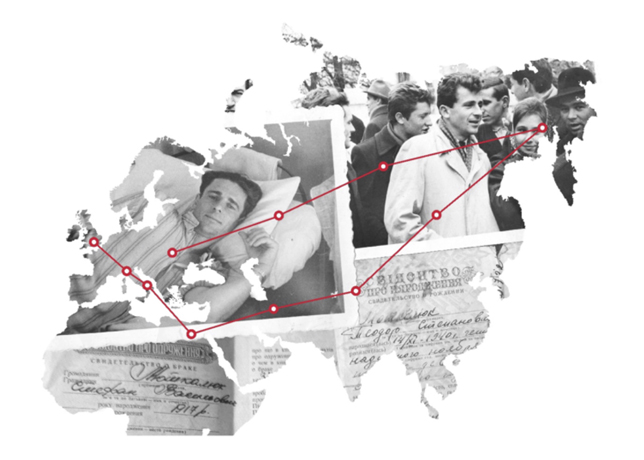 The image above shows two men—a father and son—separated by war. The father, Stefan (l) last saw his son, Teodor (r) in 1941, when the NKVD[i] arrested him in Soviet occupied Poland[ii].  Teodor was nine months old.

Stefan’s arrest was followed by a journey of c. 30,000 kilometres from his home in Poland via a Siberian gulag, military service in Iran, Palestine, Egypt, and Italy and his ultimate displacement in England; the result of political betrayal. In the process, he lost family, country, language, and identity; an increasingly familiar story in our troubled times.

My research has led to the partial recovery, not only of Stefan’s hitherto lost history but also that of his son’s; neither man knew anything of the other’s post-war life. However, as a researcher, I occupy a place both inside an existing family narrative, in which Teodor never existed, and outside it, in which Teodor’s existence was not only discovered, but his life story also unfolded.

An additional complexity arises from the fact that Stefan’s second wife was Italian (my mother), with whom he had a post-war, second family. I therefore find myself inside and outside three pre-existing cultures: Polish, Italian, and English.

This unique position prompts several critical and creative questions. As Stefan assimilates an alien culture, and adopts a new language, does he become a different person? And how does he cope with the loss of his first-born son, left behind the Iron Curtain?

How does this man’s recall or repression of fragile memories become expressed in how he interacts with his second family, as he forms a new identity in a new culture?

As someone undertaking a critically creative PhD, these and other questions are constant companions throughout the progress of my writing. They are challenges but not barriers, because, like James Fentress, I find that:

What people have done with their memories, and how, and why, in a remarkable variety of circumstances, is as absorbing in its own right as it is illuminating. (Fentress et al. 1992)

What is ethically challenging, as Stefan’s child, and inheritor of this traumatic legacy, is how to tell his story. Because, of course, it is my story too, and that of my siblings, and Teodor’s surviving relatives; the story belongs to many people, and there are many versions of it. With each new primary research finding, the story changes, as though refracted through a kaleidoscope.  With every twist and turn, new versions appear; whose is the correct story?

Marianne Hirsch points out that as second-generation guardians of traumatic histories,[iii] it is up to us—the generation of post-memory—to manage these ‘intergenerational acts of transfer’ (Hirsch 2012).

Inheriting notions of time measured in three significant segments—before, during, and after World War Two—how do I ‘carry [this man’s story] forward, without appropriating it, without unduly calling attention to [myself], and without, in turn, having [my own story displaced by it]?’ (Hirsch 2012). Growing up with parents with such inaccessible histories can preclude one’s own cultural entitlement. In the case of Stefan, a refusal to reveal his past meant that my own identity was eclipsed by the almost impenetrable moral superiority of a generation that had experienced war, trauma, and great hardship. In an imagined hierarchy of suffering, my peacetime preoccupations diminish in comparison with those of a war generation. For instance, as a child I cut off the fat from my meat, much to my father’s fury. Of course, I did not understand that a small piece of fat in months of near starvation on a daily ration of ‘400 to 800 grams of bread’[iv] (Michaels 2002) could mean the difference between life and death. Or foresee that some elderly survivors, to this day, hide portable parcels of bread around their homes for fear of the 3am bang at the door that means transportation, hard labour and starvation.[v]

These are just a few of the questions I have been asking myself over the course of my research, as I develop a largely relativist methodology that will allow the telling of all our stories. To show what happens to the identities of individuals who have escaped adverse conditions, and to their descendants, I am writing a hybrid post-memoir, using photographs, documents[vi], recollections, and imagination to fill the gaps between representation and reality.

A seminal element, which plays an important part in the plot and structure of the creative work, and provides the title of my PhD, is the photograph below. Inscribed on its reverse, in Italian, are the words: ‘remember this man?’ It serves as an example of ‘visual culture … essential to postmemory for creating … connection[s] and for contributing to the formation of a historical narrative’ (Hirsch 1997) 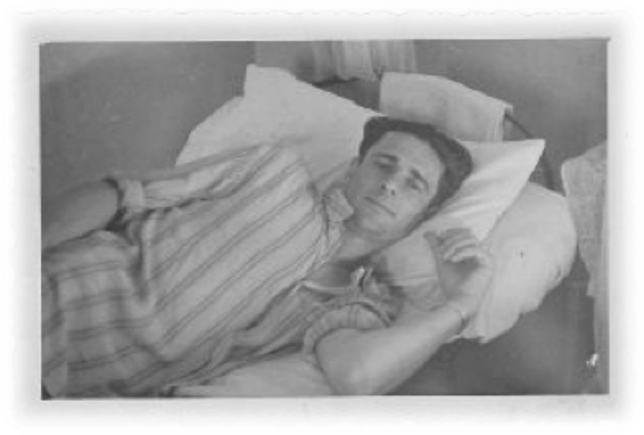 To avoid deep engagement with either/or binaries or a hierarchy of competing theories or experiences, I have decided to adopt narratives that will drive the story, thus moving away from pure biography. But having retreated from pure biography, to what extent would a historical social norm for my characters need to be present for the reader to be able to locate the characters’ individual behaviours and motivations in their own time? That is, how do I present cultural differences that resist the dominance of Western meta-narratives? After all, my research has revealed that, whilst undoubtedly experiencing hardship behind the Iron Curtain, Teodor was to a large extent a beneficiary of the totalitarian regime that existed there, gaining education, employment, and security. In 1962, at a time when his father (Stefan) was silently protecting his son in the West, that same son was serving in the Soviet navy on nuclear submarines, and accompanying ships to Cuba, under Operation Anadyr[vii], during the Cuban missile crisis.

Being both inside and outside, I reach for a double dialectic—allowing the possibility of escape from some Westernised binary models—to produce complex multiple readings that influence established paradigms, and which develop new ontologies for my characters. For characters they have now become. Through a double dialectic, my changing position—intellectually poised between stranger and friend—enables me to be both inside and outside challenging decisions; both theoretical and creative. In recognising the hybridity of my own cultural position, I am uniquely placed to examine, at close hand, ‘the connections between [my parents’] racial categories of the past and contemporary cultural discourse…’ (Moscovici 2002)[viii] and my own.

Technically, a structural answer for my writing is found in the concept of multi-directional memory, which is constructed out of ‘networks of spatially and temporally differentiated moments’ (Rothberg 2009). Therefore, I am writing a polyphonic text, in which perspectives shift, which can increase readers’ inferential capacity through their own subjective perceptions.

In returning to visual culture, then, it is possible to see how a montage of possible events is produced by freeing an object—in this case, a photograph as an example of dialectic in standstill—from a ‘history that has tied it to the contemplation of a single event’ (Benjamin 1999).

The photograph is an entry point for the multidirectional confluence of disparate historical imaginaries that I will write for this man; it becomes a production in its time and releases the image, which is no longer tied to its time. Thus, a hybrid post-memoir may be produced that carries the essence of this man’s story forward, without appropriating it, and without having my own story displaced by it. The world that existed between me as a second-generation immigrant and my parents-as-others is just one dialectic that adds reality to the discourse, despite my subjectivity being inextricably entangled in their lives, and despite the potential perils of adopting a largely relativist epistemology. For my purposes, double dialectics provide nuances that mediate ‘between relativism and objectivism to offer creative avenues of thought [not only for] contemporary ethical and epistemological problems’ (Moscovici 2002), but also for writing a creative post-memoir that operates beyond its empirical phase.

[ii] Referred to by Poles as the Kresy Territories, this part of the Second Polish Republic is now in western Ukraine, previously the Ukrainian Soviet Socialist Republic under communist rule from 1945 to 1991.

[iii] And a second-generation immigrant.

[v] Hunger is the sensation most frequently remembered by these survivors, especially among those who were children at the time of their incarceration.

Adelaide Morris is completing a PhD at the University of Winchester; a creative and critical investigation into crossing cultures, countries, and identities. She is interested in identity construction through language, memory, and forgetting. As a second-generation immigrant of dual heritage (Polish and Italian), in England she frequently finds herself simultaneously inside and outside three cultures.